The community center is also a dedicated emergency shelter that can be opened 24/7 for people to stay in during local and regional emergencies and disasters.

The current community center is one-third of the size of what was originally planned nearly 20 years ago. Due to funding, the City was unable to build the full-size facility at that time.

Since the Snoqualmie Valley YMCA opened in 2011, Snoqualmie’s population has grown by approximately 30%, with more than 40% of residents using the facility. There is often more demand than the existing facility can accommodate.

The City is exploring a funding option whereby Snoqualmie residents would not incur additional taxes for the expansion.  The current cost estimate (in 2023 dollars) for the expansion is approximately $29.8 million.

The Community Center Expansion project is part of Snoqualmie’s 2023-28 Capital Improvement Plan (CIP) that was adopted by the City Council this summer and included in the recently adopted 2023-24 Biennial Budget.

The City is engaged in planning and design work for the community center building expansion and pool addition. We will be launching a stakeholder Advisory Committee in 2023 to help the City and YMCA determine future programming needs and building components.

The City is actively exploring and seeking grants and partnerships to help fund the project. We will apply for King County Park Levy and Puget Sound Regional Council grants.  We have relayed to our 5th District Legislators that the community center expansion is one of our top priorities in 2023, and as such have requested state funding for the project during the 2023 legislative session.

We also approached the Snoqualmie Valley School District to consider funding options for the project’s 6-lane pool that could facilitate aquatic safety education and swim lessons for elementary school students, as well as offer space for swim competitions. 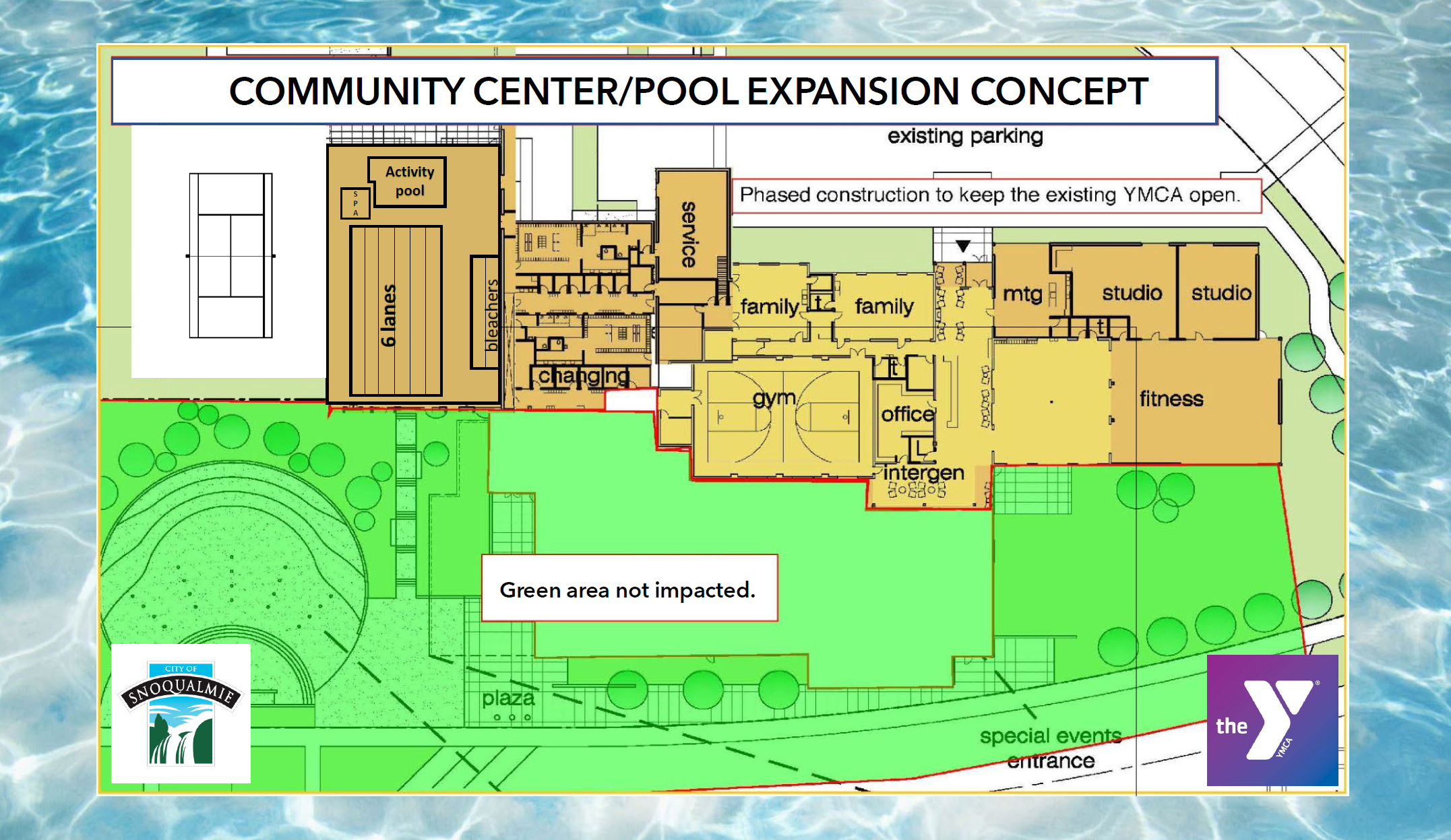 On June 9. 2019, the City held a Town Hall to gather community input about a Community Center expansion, including features community members would like to see. Over 70 people attended the Town Hall that was facilitated by Una McAlinden Consulting & Facilitation. Attendees were broken into small groups, categorized by age.

A randomized telephone survey of Snoqualmie residents was conducted in July 2019 by professional research firm EMC Research about a potential expansion of the Snoqualmie Community Center. The survey results show 72% of those interviewed felt an expansion was a good idea and supported the proposal.

Resolution 1508:  In August 2019, the City Council passed Resolution 1508, authorizing refinement of the community center expansion project scope, funding, partners, delivery methodology and schedule. In 2019, Si View Metropolitan Parks District was exploring construction of a large aquatics facility. The Snoqualmie Valley School District, as well as the City, were being asked to partner and contribute funding for the proposed $43 million, 46,000 sq. ft. aquatics facility with recreational and competition pool features. Resolution 1508, in part, provided authorization for the Mayor and City Administrator to research aquatics facility partnerships and associated costs.

Resolution 1520:  In October 2019, the City Council passed Resolution 1520, which declined Si View Parks District Aquatics Facility Proposal, and requested further refinement of options for a Snoqualmie Community Center Expansion and addition of a 6-lane competition pool.  After meetings with Si View Parks District and researching the project's Feasibility Study, it was determined the amount of funding needed from the City significantly exceeded planned or budgeted available funds; required new, voter approved property taxes for construction; a location site was not made available; and the expansion being explored by the City on the current Community Center site would utilize available City resources; YMCA contributions; and if available, a school district capital contribution.